I had a wonderful opportunity to field test a friend’s Vortex Golden Eagle scope.  I am not a competition shooter; I am not really a long-range shooter.  I am an avid hunter who loves to get his kids out with him to chase desert mule deer, javelina, coyotes, and rabbits. Simple as that… I spend my days as an Energetics Field Test Engineer where I have ample opportunity to work on interior and terminal ballistics testing for various customers.  My real playground is generally the South West corner of New Mexico where I spend my hunting days behind good optics looking over the curvature of the earth trying to find the slightest twitch of a mule deer’s ear or pierce through the shadows of a juniper tree to see what may be escaping the heat of the day.  The country is wide open and shots tend to be well over 200 yards.  Looking back over the last 10 years, typical shots on mule deer have been between 80 and 400 yards. This is just my little piece of heaven on earth. But I digress…

Figure 1: Sighting in on the Lead Sled

The HD glass is crystal clear with no noticeable distortion around the edges.  The second focal plane crosshairs are extremely fine. This model had the SCR-1 crosshairs, the acronym stands for “Simple Cross Hair,” a very clever name.  The SCR-1 crosshairs were just that, a beautiful fine target style crosshair, no MOA hash marks to busy the view, they were simple and clean, period.  This is a bench rest shooter’s dream when reaching out to 600-1000 yards.  Placing the crosshairs on the second focal plane prevents them from getting magnified when zooming in to higher powers.  This gives the distinct advantage of always looking at thin crisp crosshairs even when zoomed in to 60 power.   At 40 power the crosshairs measure 0.016 MOA, any thinner and you would not be able to see them.

The turrets on the scope are clear and easy to read, easy to adjust and easy to zero.  The vertical and horizontal turrets have 10 MOA of adjustment per revolution with 1/8th MOA clicks.  The clicks were not as positive as other Vortex scopes that I have used but were adequate for the task.  The large turrets are clearly marked and it is easy to make out the 1/8th MOA resolution marks visually.   Parallax adjustment is a must with a 4x zoom scope and the capability to shoot from 20 yards to as far as you can push your bullet.  The adjustment was easy but the parallax turret was not marked for range, you simply look through the scope and adjust until the focus is optimized.  This has a drawback when ranging a target in preparation for a shot, the parallax cannot be preset based on the range but has to be set with the operator behind the glass.

I spent most of my time with the magnification set at 15 power.  Most of my shooting was done under 600 yards and the optics and crosshairs were so clean and crisp I did not feel a need to increase the power.  When I moved out to 600 yards I increased the magnification up to 40 power; the scope really shined at 40 power with a balance of light, clarity and rock-solid adjustment.  The drawback to a large magnification scope is that target acquisition on higher powers becomes difficult when switching from one target to the next.  For long range shooting the scope is well optimized with the 4x power range where targets can easily be acquired at lower powers and turned up for 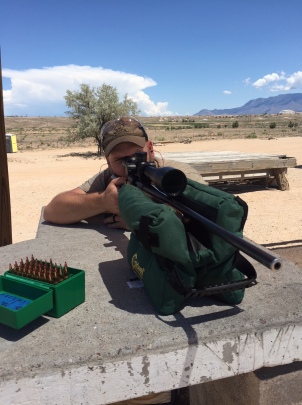 accurate shot placement.  Target clarity at the 60 power setting actually quite good, I could make out pine needles on a juniper tree from 150 yards with no issue. Site picture on the scope is extremely tight, your head has to be in just the right place to be able to see the objective.  This is an extreme disadvantage for hunting and general shooting but for bench shooting, it helps guarantee consistent head and cheek placement.  Everything about this scope is focused on consistent repeatable high fidelity target shooting.

The rifle platform was a Remington 700 ADL from the mid-1970’s.  The rifle is basic with a factory 22” barrel, Shilen trigger and a Score High glass and pillar bedding system.  It was chambered in my personal favorite 6mm Remington.  This is a fantastic cartridge capable of long shots on medium to small size game but also quite at home on the shooting range.  Let me be clear that the rifle is under par for the level of scope being shot.  The rifle has typically been a 1 MOA shooter for 25 years that I have been shooting it; today was no exception.  Do not let the rifle’s capability be confused with the scopes capability.  The rifle, even with my hand loads, produced consistent .8 MOA groups at 100 yards with the Golden Eagle attached. The scope is capable of so much more. 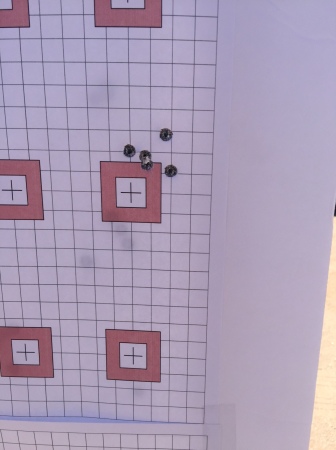 Overall Impressions: This is a fantastic scope for a dedicated bench rest gun.  It has clarity, adjustment resolution, and magnification in spades.  The overall fit and finish of the scope is fantastic.  Priced at around $1500 this is not the scope for someone who wants to punch paper for fun several times a year but rather a tool for the dedicated bench shooter or a fine addition for a competition shooters toolbox.

Competitive shooters require a very specific set of features to stay ahead of the competition, and The Golden Eagle hits the mark (pun intended). The 15-60x magnification, fine reticle, and positive and repeatable tracking are perfect for fine tuning that record shot. Plus, its relatively light weight—29.5 oz.—allows shooters to adhere to strict competition weight limits.

Thanks, Russ P. for this awesome review!  Swing by Vortex and get some!