Do you know what rifles were used in the Revolution War for Snipers.  Check out below 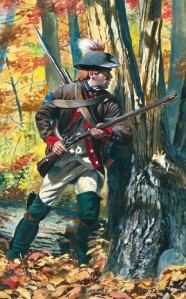 Long rifles were an American design of the 18th century, produced by individual German gunsmiths in Pennsylvania. Based on the Jäger rifle, these long rifles, known as “Pennsylvania Rifles”, were used by snipers and light infantry throughout the Revolutionary War. The grooved barrel increased the range and accuracy by spinning a snugly fitted ball, giving an accurate range of 300 yards compared to 100 yards for smoothbore muskets. Drawbacks included the low rate of fire due to the complicated reloading process, the impossibility to fit it with a bayonet, the high cost, and lack of standardization that required extensive training with a particular rifle for a soldier to realize the weapon’s full potential. Due to the drawbacks, George Washington argued for a limited role of rifles in the Colonial military, while Congress was more enthusiastic and authorized the raising of several companies of riflemen.  Long rifles played a significant part in the battle of Saratoga, where rifle units picked off officers to disrupt British command and control but required support by units armed with smoothbore muskets or by artillery to prevent the riflemen from being overrun

The American Long Rifle was a muzzle loading, long rifle, which very much played the role of a crude sniper’s rifle in the American revolution. This rifle was accurate up to 200 feat, twice that of the more popular muskets. However, the American long rifle was difficult to load, and took time, making each shot more costly.

This gun was generally used by sharp shooters, to pick off British infantry or take more calculated shots, rather then firing in volley like with a musket.

The Pattern 1776 Infantry Rifle is one of the more famous revolutionary war weapons, despite only 1,000 being made. This German style rifle was modeled after the Jäger rifle, one of the more accurate of it’s time. In 1776 the Royal army ordered 1,000 of these rifle to supply to light infantry fighting against the revolution, to combat the American sharp shooter. In many ways, this rifle was the opposition of the American Long rifle.

The Patter 1776 Infantry Rifle did not disappoint, with it’s accuracy of 300 yards, three times as much as the leading musket, and a hundred yards further than the American Long rifle.

Features of the Pattern 1776 Infantry Rifle: