This year on our Sniper Tuesday we will start from the Revolutionary War to Present.  Featuring different Snipers and what they have done.  Sit back and enjoy it!  Read below

Patrick Ferguson was a Scottish officer in the British Army, an early advocate of light infantry and the designer of the Ferguson rifle.
Did you know: This important shot is more of a shot not taken? AT the Battle of Brandywine Captain Patrick Ferguson had a strong looking American General in his sights. However, The generals back was turned he thought it would be ungentlemanly to take the shot and kill him. If he had taken the shot we would have lost the war. Because that General was General George Washington.

There has long been a story about a British Major of Sharp Shooters, Patrick Ferguson, and his having had a chance to shoot George Washington. A lot of circumstantial evidence has been gathered making the whole seem plausible, but one missing piece, the identification of a “French Hussar” with him in September of 1777 – before the French were involved. But one eminent scholar has recently noted that in late August of 1777 that Count Casimir Pulaski was temporarily assigned to General Washington as an Aide-de-Camp. Congresses purpose was to famarilize him with the American Army system, before granting him a cavalry command as the first Brigadier General of Cavalry. Here is his story:

One of the most fascinating aspects of historical research is how one obscure statement can open up into a major, although little known incident, with vast implications. While reading John Andrew’s 1786 multi-volume work, “The History of the Late War” he alludes to Major Patrick Ferguson taking aim at an American General Officer and his escort, an officer of Hussars. The senior officer is thought to have been none other than General George Washington. 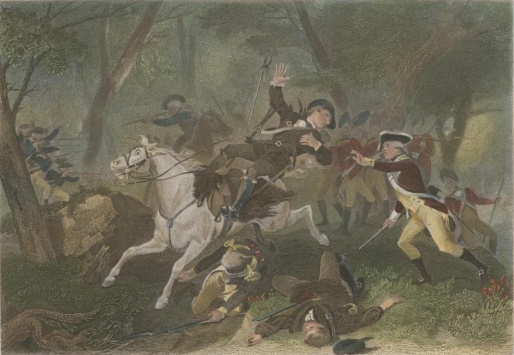 Colonel Mark Boatner in his “Encyclopedia of the American Revolution” also makes a brief mention of the incident. Both authors in their brevity leave many questions unanswered. Was it really George Washington in Major Fergusons’ sights? Who was Patrick Ferguson? The reference to an officer of Hussars doesn’t ring true – there were no Hussars in the American Army, and certainly, a professional soldier such as Ferguson could distinguish between a Dragoon and a resplendently attired cavalry type known as a Hussar. Was this another myth? I believe the findings in this article will make interesting reading and prove it really happened. 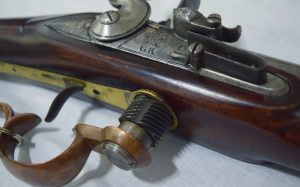 First, Patrick Ferguson would have been a “hero” of the Revolutionary War, had the British won! He was born in 1744, the son of James Ferguson, an illustrious Scottish jurist. He was educated in the London Military Academy and was given a commission in the famed Scottish cavalry regiment, the Scots Greys. He became interested in musketry and invented a superior weapon to the standard “Brown Bess” musket. His was breech loading and weighed a mere 7.5 pounds (compared with the Brown Bess’s 14 pounds). He demonstrated his rifle’s capabilities to the British Senior Generals by firing at a rate of 4 rounds per minute at a target 300 yards away. He increased the rate of fire to six rounds a minute at a target 100 yards off.

He so impressed his Majesty, King George III, that he was sent to North America with orders for Sir William Howe, Commander-in-Chief of the British Expeditionary Force, to establish a “Sharp Shooters Corps” to be commanded by Major Ferguson. Unfortunately for we Americans, Ferguson was good. On several occasions, his small force was the deciding factor in an engagement.

In the immense collections of the Public Record Office in London is correspondence from Colonel Ferguson. In one of these letters, he describes, in some detail, the encounter with General Washington, yet in another, he admits he did not know it was Washington at the time.

Ferguson wrote that he and three of his Sharp Shooters were scouting the American lines near Chadd’s Ford, along Brandywine Creek (hence the name of the ensuing battle). He and his men heard the approach of two horsemen. The first was a brilliantly clad Hussar and the second rider, a few paces behind, was wearing the traditional blue and buff uniform of an American Senior Officer, mounted on a bay horse and wearing “a remarkably large cocked hat”. He also noted that the Officer was of “exceptional distinction”. It is obvious that if Ferguson had indeed recognized General Washington he would have said so, and not take the time to describe him as he did. It is important to note that in the 18th century, there were few likenesses published, so Ferguson would have had to have met or at least seen Washington to have recognized him.

Ferguson continued: His first thought was to cut the two riders down where they sat, so he ordered his men “to steal near to them and fire at them”. He then changed his mind and signaled his men to hold their fire. He thought his first impulse was “disgusting”. He then stepped from his place of concealment and ordered the Hussar, the closest of the two, to step down from his mount. The hussar shouted an alarm. Wahington whirled his horse, Nelson, around and galloped off. Ferguson wrote “As I was with the distance, at which in the quickest firing, I could have lodged a half dozen balls in or about him before he was out of my reach, I had only to determine, but it was not pleasant to fire at the back of an unoffending individual who was acquitting himself coolly of his duty, and so I let him alone.”

Four days later, the Battle of Brandywine took place. Major Patrick Ferguson fell when a musket ball struck his right elbow. He would never regain full use of the arm, but continued on active duty and actually learned to load his rifle with one hand!

While in the field hospital recovering from his wound he wrote (obviously with his left hand and with great difficulty) “One of the surgeons who had been dressing the wounded rebel officers came in and told me that they had been informed that General Washington was all that day, (7 September 1777) with the light troops and only attended by a French Officer in Hussar Dress, he himself, dressed and mounted in every point as described.”

This letter reaffirms the theory that Ferguson did not know it was Washington he challenged. But, if he had known it was Washington himself, would he have cut him down? This writer thinks not. Shooting down enemy officers in cold blood was looked upon as dishonorable in the 18th century. Major Ferguson was a professional soldier and an honorable one. He proved that when he and his Sharp Shooters were assigned to support the occupation of the South. In 1779 at Charlestown, South Carolina, Ferguson heard screaming from a “rebel” house. He rushed in immediately and found several of Colonel Banastre Tarleton’s Dragoons molesting the women who lived there. He ordered the Dragoons arrested and hung! Tarleton intervened on their behalf and informed Ferguson that the men were entitled to a trial. No record has been found as to who prevailed.

We now turn our attention to confirming the letters of Major Ferguson. None of George Washington’s biographers mention the Brandywine incident. Washington did not record the event, which is not surprising, as General Washington had no way of knowing how close to death he had been. However, in the Bicentennial Edition of “The Writings of George Washington” (1933) Volume. IX, Page 195, a letter from Washington’s Aide-de-Camp, Robert Harrison, to the President of Congress, John Hancock, states: “Sir; His Excellency being out reconnoitring and busily engaged in the affairs of the Army, I have the honor of acknowledging his receipt of your letter of the 6th”, dated on September 7th, 1777. This confirms that Washington was indeed out on a scouting mission.

The Count de Pulaski, a refugee from the Polish Army, was in Paris, France when it was suggested that he serve in the American Army against Britain, which he accepted. Armed with a letter from Benjamin Franklin and a cash advance from Silas Deane he sailed for America. In July of 1777, the 29 year old was accepted by the Congress and was assigned to General Washington as an Aide-de-Camp. We know Pulaski wore the uniform of a Hussar, but no detailed description has survived, we also know he was with Washington in late August and early September. It may well have been Pulaski that Ferguson saw with Washington that eventful day.

Casimir Pulaski went on to command a cavalry unit with great distinction. He was mortally wounded while leading a gallant, but foolhardy, cavalry charge at Savannah, Georgia on October 9th, 1779.

This article would not be complete without offering a word of praise about a gallant fallen enemy, Major Patrick Ferguson, whose code of honor spared the life of the Father of our Country. Patrick Ferguson was killed in action at the Battle of Kings Mountain on October 7th, 1780.

*At the time of the Battle of Brandywine, Ferguson held the rank of Captain. At the time of his death at Kings Mountain, he was a Major, and his brevet to Lieutenant Colonel was in transit when he died. Since his name appears on the official rolls with the higher rank, most historians make reference to him as Colonel Ferguson, hence the seeming confusion between various commentators.

We want to thank AmericanRevolution.ORG for this article.  For more information please see the following link: https://www.americanrevolution.org/ferguson.php