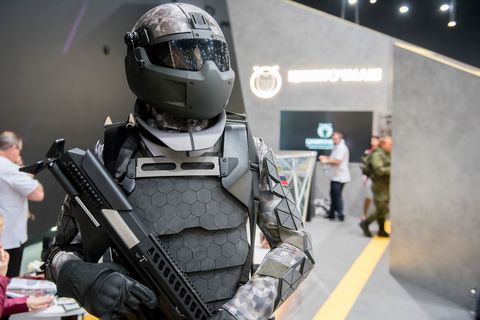 The Russian government plans to demonstrate “stealth camouflage” technology for ground forces capable of changing its appearance. The camouflage, developed by Russian defense contractor Rostec, will be shown off at this week’s Army-2018 defense exposition in Moscow.

According to Russian state media the camouflage can change its color and pattern depending on the soldier’s environment. Rostec CEO Sergei Chemezov stated that the technology, “can reflect color changes and imitate complex graphical depictions, up to the leaves wavering in the wind.”

Rostec plans to demonstrate the camouflage system on a helmet at Army-2018. It’s unknown exactly how the technology works except that it is “electrically controlled.” Rostec claims that the system could be used for soldier uniforms and even tanks and armored fighting vehicles.

The camouflage system is part of the Ratnik-3 soldier improvement program shown above. Ratnik is a decade-long effort to improve the equipment of soldiers in the Russian Ground Forces, particularly the infantry, with new body armor, outdoor equipment, and weapons. Rostec says that 120,000 Ratnik kits have been provided to the Russian Army. Some of the more mundane equipment, such as clothing, compasses, and ear protection, is available on eBay.

Ratnik-3 is the most ambitious stage to date, including stealth camouflage and a powered exoskeleton system designed to reduce fatigue and increase the carrying capacity of Russian soldiers. While previous iterations of Ratnik concentrated on fairly inexpensive kit, Ratnik-3’s goals are the most technologically complex and expensive to date. Even if Russian industry was able to perfect stealth camo and exoskeletons, it would likely be too expensive to fit ordinary Russian troops, with small numbers of Russian special forces—spetsnaz—the likely recipients.

Thanks, Kyle  Mizokami for the article.  Read more about here: https://www.popularmechanics.com/military/research/a22777736/russia-to-demonstrate-active-camouflage-for-soldiers-tanks/