Why have you not seen the Applegate-Fairbairn fighting knife AF 4.5 knife!  Boker USA not only haves it, but at an awesome price.  Boker is the only knife company that has this knife in different versions.   You see –

As the crowd started to come in and set down their bags.  Each one was looking at each other to see

what each person was going to use in this class.  Each person was, “sizing” each other one up.  One by one each person pulled out their own personal fixed blade.  Believe it or not the blade you carry tells a story of who you are and what style of fighting you are.  But, no one really cared until the instructor showed his.  That was about the time I walked into the room.  Being the instructor you have to set a precedence’s in this class of Tier One operators.  I sat my bag down and reached into it pulling out my AF 4.5 knife I got from Boker USA.

Boker USA, yes! has tons of different knives.  But the AF 4.5 is the one I found to be good for this class of special operators.  It is small to easily move around.  Double bladed for function of it’s use. and the grip allows me to keep it strong in my hand.  Check out the stats from Boker: 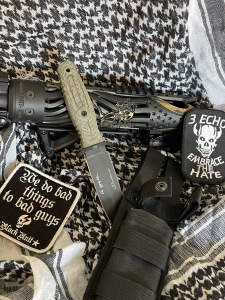 Among the entire variety of combat knives, completely blackened versions are basically a must-have. The black versions are very popular, not just for military operations, but also due to the special charisma of such dagger and the added corrosion protection provided by the coating. So it was basically our duty to add such a variant of the A-F 4.5 and A-F 5.5 models. Hardly any other knifemaker has influenced the field of tactical knives as much as William H. “Bill” Harsey, his designs have earned him an excellent reputation in the knife world. His modification of the legendary Boker Applegate-Fairbairn combines the knife used by many elite units with modern elements. The larger blade width and the more favorable geometry of the double edged N690 blade with black PVD coating improve the cutting properties, while the blade length offers an optimum compromise between guidance and utility value. The tang reaches out of the end of the handle and it can be used as a window breaker. The CNC-milled handle scales made of black Micarta are extremely durable, pleasantly structured and offer excellent grip even when wet. Delivery includes high-quality black nylon scabbard by SpecOps.

Who is Rex Applegate? 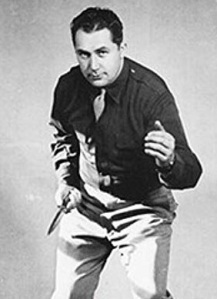 Rex Applegate (June 21, 1914 – July 14, 1998) was an American military officer who worked for the Office of Strategic Services, where he trained Allied special forces personnel in close-quarters combat during World War II. He held the rank of colonel

In the early 1980s, Applegate released a design called the Applegate-Fairbairn fighting knife (a modified version of the World War II Fairbairn-Sykes knife). The new knife’s design was a collaborative effort by Applegate and Fairbairn during World War II, eliminating the major weaknesses of the F-S knife (among them a weak blade point and the impossibility of determining the blade’s orientation by grip alone). Boker Knives offers several versions of the A-F knife. Gerber Legendary Blades produced a line of folding knives by Applegate and Bill Harsey, Jr. based on the Applegate-Fairbairn fighting knife.

In the late 1980s Applegate released a modified version of Fairbairn’s Smatchet, which had been used by the SAS and OSS during World War II. The development of this weapon began as a collaborative effort between Applegate and Fairbairn during the war. Applegate named his 10-inch 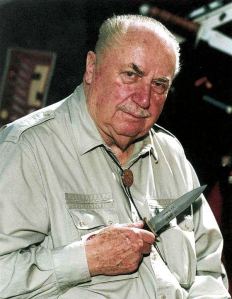 (25 cm) double-edged knife the “Applegate-Fairbairn Combat Smatchet”; it was initially offered as a handmade knife by Bill Harsey, Jr., and later by Wells Creek Gun and Knife Works, and after that by Al Mar Knives. Following Mar’s death, Böker Knives was licensed to produce it. Applegate later had Harsey design a “Mini-Smatchet” (with a 4.75-inch (12.1 cm) blade) which was produced by Boker.

Applegate was inducted into the Blade Magazine Cutlery Hall of Fame at the 1994 Blade Show in Atlanta, Georgia in recognition of the impact his designs have made upon the cutlery industry and for his writings on knife fighting.

But, what about those times you have to practice on someone?  You can not use the real deal!  Lucky for you Boker USA came up with a trainer to sell!  Check that out below:

The dimensions and shape of the Applegate-Fairbairn Training Tool match its world-famous model. The complete knife is made of rubber for safe and effective training. Set of two knives.