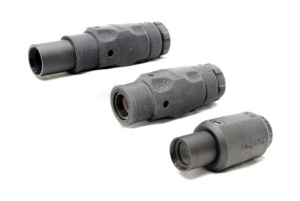 To say I’ve been patiently waiting for the Aimpoint 6XMAG-1 is an understatement.  Since last June, the 6XMAG-1 has been at the top of my list for items to test and evaluate.  In 2016, Aimpoint launched their new line of magnifiers including the 3X-C (civilian version), 3XMAG-1 and the 6XMAG-1. 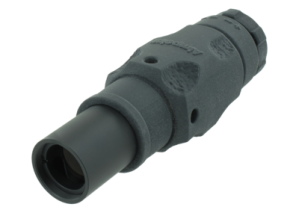 Previously, I used a 3x magnifier on my M4 and loved it.  3x magnification was great, but I was excited to learn that a highly respected and reputable company finally took on the challenge to create something with a little more magnification.  The engineering challenge was packing 6x magnification into a unit small enough to mount behind a red dot and still allow for “flip to the side” operation. 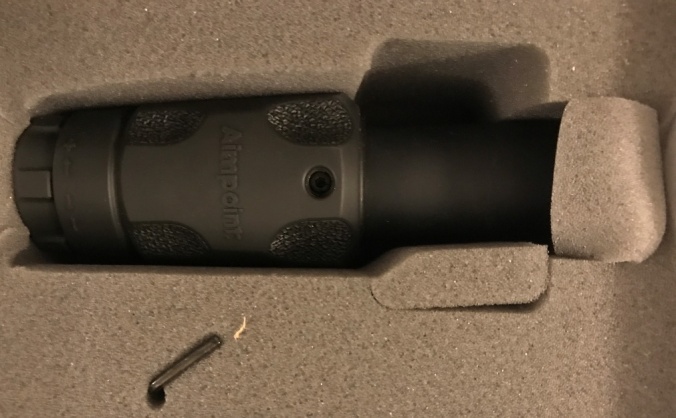 Initial unboxing of the 6XMAG-1 indicates that it is ruggedly built to withstand the use and abuse of everyday military/law enforcement.  Its shell is hard-anodized aluminum with a rubber armor cover.  At six inches long, it’s only slightly longer than the 3XMAG-1 but provides twice the magnification and at 8.1 ounces, the weight it adds is well worth the performance it provides.  Since the 6XMAG-1 doesn’t affect POI, I threw the 6XMAG-1 on an open rail of an already zeroed 12” AR and off to the range we went.

Aimpoint has really impressed me with the design of this magnifier.  It’s simple to install, simple to operate and there aren’t a lot moving parts which means less chance for something to go wrong when exposed to stress.  The 6XMAG-1 allows the user to adjust the viewing window to center the red dot into the middle of the lens and also adjust dioptric adjustment, ± 3.0 D.  They even provide the necessary hand tool to make these adjustments.

Range operation was flawless.  Grouping a 12” at 50 yards with no magnification isn’t difficult, but it’s so much easier being able to fine tune things with some magnification.  The additional magnification allows for easier target identification and allows the operator to be more precise when engaging targets.  Steel plates at 100, 200 and 300 yards were easy to engage utilizing the 6XMAG-1 and the POI didn’t change when flipping the 6XMAG-1 to the side at closer distances.

Adding to the brilliant design of this magnifier, Aimpoint has also created an innovative mount that allows the operator to manipulate the 6XMAG-1 (or one of the other Aimpoint magnifiers) two different ways.  As mentioned above, the operator can flip the 6XMAG-1 to the side and out of the optical axis for easier target engagement at closer ranges.  This is done simply by pushing the magnifier to the side.  Since this doesn’t require any buttons or levers to be manipulated, no fine motor skills are required to make this transition.  When the operator wants to utilize the magnification again, they simply push the 6XMAG-1 back in line with the optical axis and continue engaging.  What makes the Flipmount Complete unique is if the operator wants to quickly store the 6XMAG-1, there is a lever that can be pressed to release the 6XMAG-1 and rotate it completely off the host weapon.  This comes in handy for storage when the operator doesn’t need the 6XMAG-1 for a particular mission or if the 6XMAG-1 needs to be tossed into a drop pouch for whatever reason.

Bottom line, the whole 6XMAG-1 setup is badass.  I would highly recommend this setup for any operator that employs a red dot sight and doesn’t operate exclusively in buildings (distances within 50 yards).  It’s the best of both worlds where field of view is important, but magnification is also needed when maneuvering in the open.

Find out more from Aimpoint at http://us.aimpoint.com/product/aimpointR-6xmag-1/.

The Aimpoint® 6XMag-1 was specifically designed for use with Aimpoint® Micro T-2 and Aimpoint® Micro H-2 red dot sights. This module gives professional users enhanced capability for long-range aiming and observation. A variable (-3 to +3) dioptric setting allows the magnifier to be adapted to the individual operator’s eye.

The 6XMag-1 can also be used as a handheld 6X monocular. Aimpoint magnifiers utilize the red dot in Aimpoint sights as the aiming reticle, eliminating the need for re-zeroing when shifting between non-magnified and magnified aiming.

The 6XMag-1 is encased in a shock absorbing protective rubber cover that also creates an ideal ergonomic grip. Internal optical adjustments make aligning the magnifier and sight quick and easy.

2 thoughts on “All new Aimpoint 6XMAG-1”